Liz lettuce gets a facelift

The lettuce won - that’s how every person and their dog shared the news last week of the resignation of Liz Truss as the UK PM. 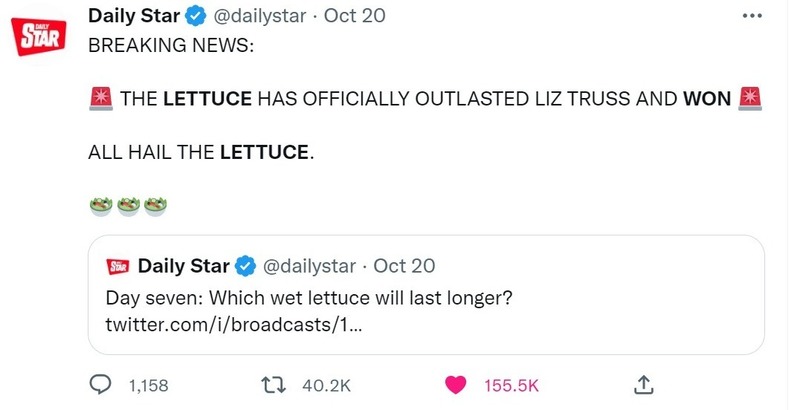 What started out as a healthy LOL about 10 days ago for me when the live cam was created, rapidly turned into a work sprint to serve up a googly eye official augmented reality Instagram filter after the Daily Star formally commanded Everywoah to rustle something up.

At times of gloom and woe, and yes political hellfires, people continue to fiercely enjoy shared experiences and healthy humour, and there’s plenty of reasons why remixable video, aka AR filters, compliment video live streams, chats and tweets, with copious amounts of bantz all week long.

When you end up walking into a meme with an AR filter it can take any sort of direction, these video clips in this compilation are literally the tip of the iceberg.

As trite as silly face filters may seem, they appeal to our innate sense of escapism, of acting, of playing up -  sort of like momentary fancy dress without too much of the hassle of the apparel and physical makeup.

And it’s notable how many people feel free and safer when their true identity is partially concealed yet they can still exasperate and express themselves through a daft mask.

Congrats to the Daily Star who sparked a cultural phenomenon as the story gained widespread participation and coverage from UK and global media. 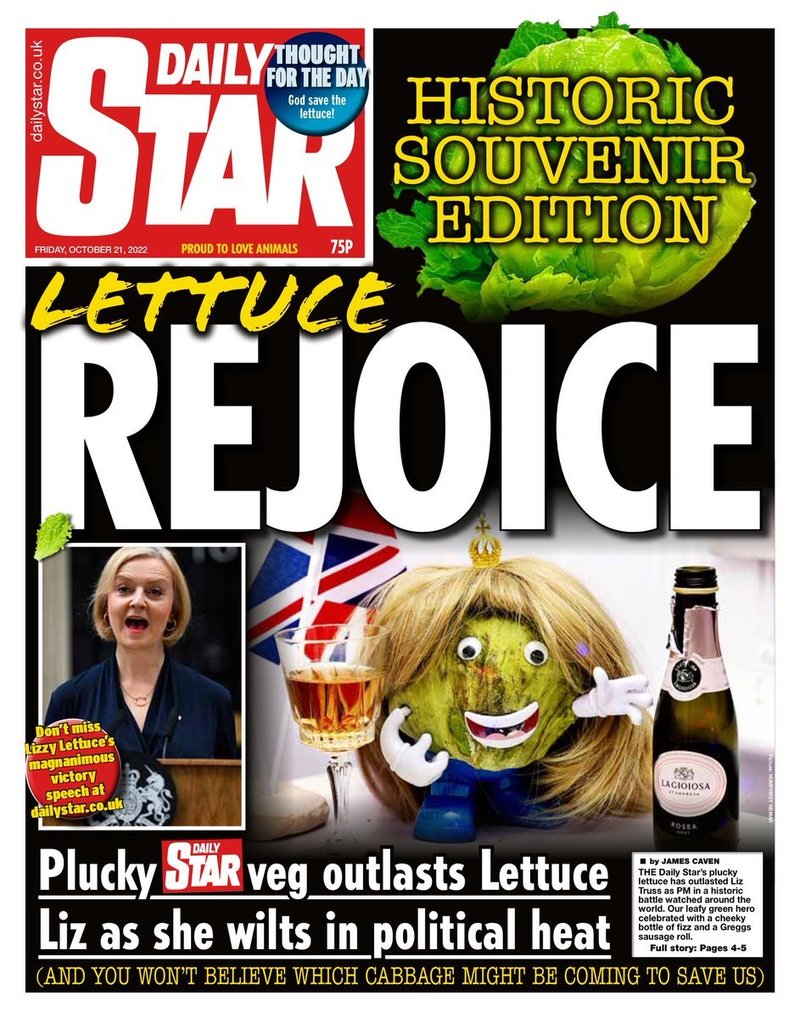 In doing so they have ensured that the humble 60p lettuce follows in the tradition of british satire entering the hall of political fame and folklore, forever destined to rank highly among other revered foods joining the likes of the tub of lard (Roy Hattersley), eggs (John Prescott, et al), milkshake (Nigel Farage, various), custard pies (Ann Widdecombe, Rupert Murdoch), and that more contemporary morsel, the bacon sarnie (Ed Miliband).

And whilst many astute observers around these parts have noted that the Daily Star staff are closet Economist fans having taken editorial inspiration from their “iceberg lady” and “shelf life of a lettuce” quips, there’s another deeper conspiracy story worth digging up that may explain the head start the lettuce genuinely had.


You see back in sunny hot September, the esteemed publication Grocery Gazette, announced that UK supermarket Tesco had relaxed the required specification of its Iceberg lettuces, allowing growers to harvest them quicker so they retained their crispiness.

The new sizing specification meant that lettuces  - mostly exported here from Murcia, SE Spain from where I compile this piece - were permitted to be harvested up to two days earlier than before, ensuring they didn’t wilt in the fields and stayed crisper for longer.

So now you know, global warming and the risk of crop failure ultimately impacts political life.

And people love to dress up as a vegetable.

Try the filter at everywoah.com/filters/liz-lettuce on Instagram or TikTok.