Last November I had the pleasure of attending the Congreso SEO - also referred to as the SEO Pro - as an invited speaker at the Olympia Hotel in Valencia, here in Spain.
¿Lo prefieres en español? 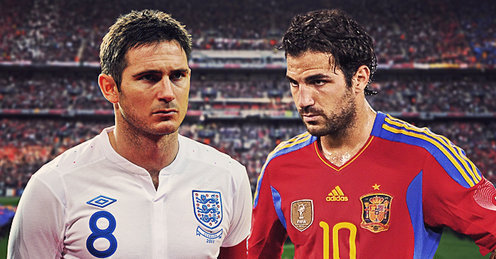 The organiser, Miguel Lopez from Marketing Online Valencia, had made a herculean near solo effort to put on a superb SEO event that united a devoted bunch of the finest Spanish SEO minds to knock heads and hearts together for three days.

I won't delve into a detailed round up of presentations. That was already done in the afterglow of the moment by several other speakers from Spain and attendees from around the world.

Suffice to say the excellence of thought and presentations was outstanding. Don't take my word for it, other seasoned SEO speakers who travelled afar can attest to the level on show.

Fortune has it that my job and background means I frequent England and Spain for work and pleasure all the time, and as I am tempted, with so much in life, I often pause to contemplate the pros and cons to each. So this is my take on how Spain and UK stack up at SEO events. 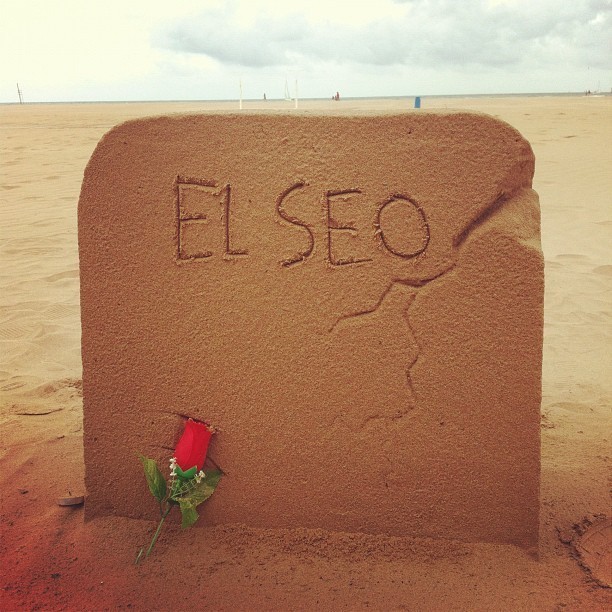 Photo thanks to @carrero

Or does it? In the UK the SEO scene is bigger. I'm not going to start digging up the stats, comparing agency head count, billings or search or PPC metrics, but I will put my neck on the professional line and claim that SEO as an industry is a more an established profession in the UK and accepted discipline within marketing compared to that in Spain.

And so what? Well, in terms of conference size, attendance and frequency of events, the UK has a wealth of events to choose from. Ranging from the free, the spirited raucous to the premium priced and the SEO events that form part of a larger online marketing fairs, there is a wide choice on offer.

In contrast, Spain sports less amount of formal events, however that is not necessarily such a bad thing, as it's what you do with your SEO event that counts, right? During the SEO Pro in Valencia, the seventy or so attendees had ample time over three days to really make solid professional connections and strengthen friendships.

In contrast in the UK, I've often found myself forced to diligently pre-research attendees and companies whom I wanted to network with, before the event, to allow myself time to adequately devirtualise the SEO brains in the room.

Wealth of riches you might say, well there certainly is a camaraderie in Spanish events that has echoes of the earlier days of the British SEO scene in the pre halycon days of Google.

And let's be clear, just because you're first to invent something, that does not confer you the status of the best practitioner at it. The British know that all too well; Football? err Who won the last World Cup for petes sake?

England score from a free kick with a cruel deflection!

It goes hand in hand with size, that a large event demands significant resources to keep everything all tickety-boo and this will invariably be a large contributing factor to the price of the ticket.

During London's recent SearchLove event by Distilled [c], the army of people running the show allowed for professional sound and vision, full recording, and all the ancillary tasks required for a glitch free event.

It's not just the event itself, but all the promotion of it before and after that places great demands on the organisers and tests their promotional skill.

Distilled's SearchLove did a good job of whipping up interest via online buzz prior to the event in October and produced once again a delightful printed booklet for attendees packed with speaker interviews. 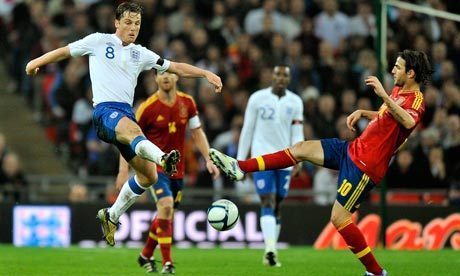 This sustained a hashtag level of interest in the event for weeks in advance. Attendees didn't go home without any goodies though as several attendee and speaker companies dealt out schwag or more vitally, free trial codes for worthy paid SEO services/tools. It wasn't just a Spanish version of any old shitforlinks.

Where SearchLove excelled was the supply and openess of the speaker .ppt decks after the event and the filming of the presentations, in contrast SEOPro restricted the distribution of slides only among the speakers privately and neither audio or video recorded presentations.

As five months have elapsed since my CongresoSEO presentation (Representación de datos para SEO or Infographics for linkbuilding) Miguel has kindly consented for it to become public. 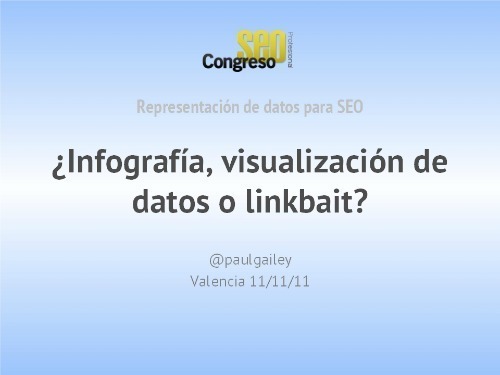 Grab all the links from the presentation or read and comment it in this Google+ photo presentation. View or download the entire deck from my Dropbox although please note unfortunately the embedded YouTube videos will not playback.

In terms of hob nobbing, mingling and entertainment I'm afraid there was little contest between Valencia and London.

Whilst both SEOPro and SearchLove ran single track jam packed days of speakers presenting for 45-60 minutes, the London timetable was brutal on social options for mingling compared to Valencia.

Yes, they're is after-event shoulder rubbing at SearchLove but its attendance is partial relative to conference crowd.

Of course the sandwich lunch culture, or should I say stand up SearchLove noshing is accepted practice in the UK, don't get me wrong the food was very good and people came for the talks not the grub after all, however the food in Valencia throughout the three days was just glorious.

Attendees sat to eat in a restaurant in well mixed up tables during the event and conference talks would restart at five ending at eight o clock in the evening.

That stoppage time during the day allowed for delegates at SEOPro to catch up on business or take a well deserved siesta.

How else are you going to recuperate the mad late hours of partying? Suffice to say Valencia stole the show on the partying aspect.

So when it comes down to the crunch, how does the quality of SEO compare between the two?

Both events boasted a high quality of presentations.

People had done their homework, generously shared their data and insights and anecdotally it seemed attendees were highly satisfied with both Congreso SEO and SearchLove.

Both events have suffered from external criticism from non attendees who have either misinterpreted comments, that seep out via Twitter or morph into Chinese Whispers.

Sure enough both events were dominated with a plethora of references to Panda, although in Spain the most common element that unified all presentations was a devout homage to scrapers. 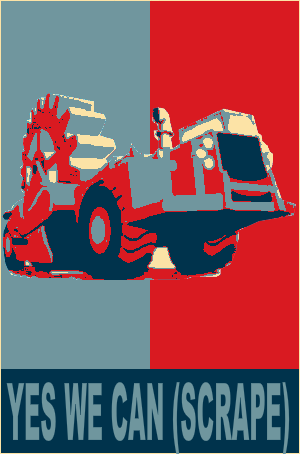 Edit: one worthy Panda inclusion, was the bizarre coincidence that I selected an infographic to show during my presentation from a company called AttachMedia, unbeknown to me, the author of it was in the audience and introduced himself to me afterwards. He had come from Peru just for the event!

At London's SearchLove, speakers included big USA names in SEO as well as local Brits. In contrast Spain featured pretty much all local based talent with a few exceptions.

I think there were presentations in Valencia worthy of a wider audience such as the advanced faceted navigation decks from Fernando Macia and Rodney Cullen that would go down well with an audience in London and further afield. I particularly admired the SEOcial media thinking from Jose Llinares.

However there was no shrinking violets in Spain when it came to openly talking exposing the darker techniques of SEO, in contrast when this happens in UK, it's usually preceeded with a stern warning not to try this at home, a plea not to RT and a hand clasped over the microphone.

If anything Spanish SEO's pull no punches when discussing dark SEO in public, possibly in part because their thoughts are not as amplified compared to the UK.

I'm not an advocate of grey/black hat techniques although I can't refute there are short term success eeked out at times by some, although since November of last year, some of the techniques discussed in Valencia have since proved ineffective and infact counterproductive with further algorythmic refinements by Google.

Late last year I felt a little relief to note that Matt Cutts was referred to in a Google Blog as a Distinguished Engineer instead of the Head of WebSpam.

Indeed imagine a Direct Marketer equivalent being continually referred to as the Head of Junkmail. Hardly appropriate.

Anyway, my point here is that as the english speaking SEO market matures, SEO is more mainstream marketing accepted and it's defintion evolves to overlap social and inbound marketing.

There is a collective effort by leading english speaking SEO practioners to drag the SEO discipline more to the marketing mainstream than continue to suffer from a poor reputation and escape the perception of SEO in crisis.

If anything the debate about definition of Inbound maketing has accelerated since November of last year and is unlikely to subside.

Is there a phrase (besides "inbound marketing") that describes combined processes of SEO, Social, Content, CRO & Analytics to earn traffic?

In contrast in Spain, my feeling is that the profession is still too far from the centre of online marketing.

There is a telling friction between the SEO community in Spain and it's noisy Community Manager's virtual nascent sister it is awash with.

At one point during the presentations in Valencia, a slide with the average advertised salary levels contrasting Community Managers and SEO's jobs, drew gasps of mild shock and the odd irritation. 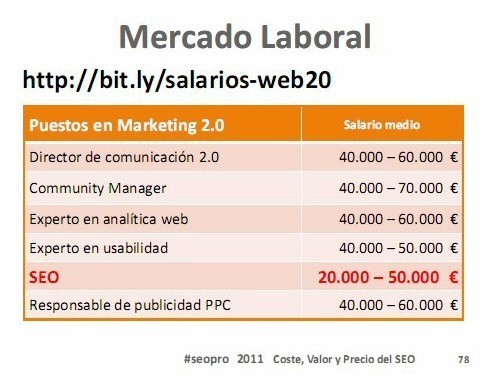 This was despite the previous slides demonstrating the disproportionate commercial value SEO had conferred to the organisations.

There was actually a Community Manager centric event in Sevilla at the same time as the Congreso SEO and there was a palable gulf of disdain between the occasional interesecting monolgues on Twitter amongst the two camps during the weekend.

A game of two halves

It's perhaps an unfair call to compare SEO events in both countries like for like. I think SearchLove and Congreso SEO were both successful in their own right and if you have the chance you should attend either of them. Seriously.

And as usual I am quite torn between any comparison between Spain and England and whenever the national teams compete in sport I typically back the underdog for want of more competition. 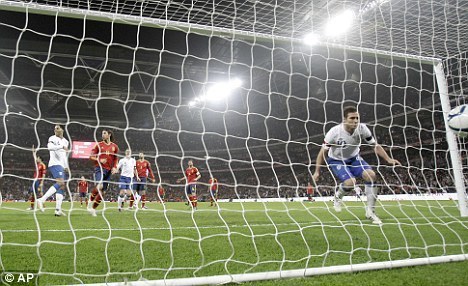 ...Spain are denied a penalty in the dieing minutes of the game and England snatch an injury time winner in a goal mouth scramble.

Distilled's LinkLove conference was held last week in London and Boston. Here's their round up. If you missed it, you will be able to buy SEO conference videos.

So what do you think?

Does England pip Spain for SEO conferences or vice versa?

Did I referee that right or would you give me a yellow card?