When Bing came on the scene I was quite lifted. Secretly chuffed.

Here was a contender to Google for search, that somehow had less of a Mircosoft edge than before, and despite a starting share of the search market at around 8% there were plenty of early indicators it was quite promising. Despite being wedded to Google for search and ever more activities, I felt compelled to try Bing for a variety of reasons, and I really wanted it to succeed. After all, this is the operator who gazumped Google to the announcement of inclusion of the blended search results that were to include tweets on the page of results.Wow, they are on the ball. I thought they really meant business.And so every now and then I would Bing it instead of Google it, willing on the david v the goliath, always supporting the underdog, and increasingly often being genuinely satisfied with the experience. I even began to warm to the whole onomatopoeic allusion that Steve Ballmer planted in my memory somewhere in 2009, when he explained that the search engine was named as such because that is the sound associated with finding something. A sort of eureka moment. Then tonight I realised that all that was just an allusion.

What happened? - iPad happened Steve, that´s what happened. - iPad -  you hear me?

Like a few others I indulged in the online mobbing of the coverage of the iPad and swarmed over Twitter in the quest for information emanating from Yerba Buena Center for the Arts Theater somewhere in San Francisco (what a cool name, eh? - it almost translates as good grass)

The Apple hype machine had been in overload for weeks leading up today, and tellingly, Twitter´s service degraded for a period under probable weight of related activity - as they deactivated the lists function for a period. Reporters on the scene complained of jammed networks, slow wifi in the hall, and online streaming sites buckled under the weight of the thirst for information from an eager worldwide crowd desperate to get in on the act. So a few hours later, once the frenzy had settled down a little and bloggers continued to exchange thoughts and write up the features of the device, I thought I would Bing once again. 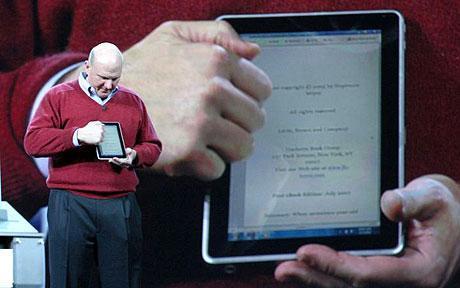 Now, many a more authorativive author has indulged in laborious comparisons of Bing v Google in the past, and I know there are more rigourous ways of A/B testing search results - nonetheless the snapshot results as displayed in this image gallery are shocking.

Google.com, Google.co.uk (both non personalised results) show a good dose of iPad related results with tweets, news and blogs. Even Yahoo does an OK job, and to be fair Bing is not entirely blank on the subject. However shuffle through these screenshots taken only a 120 minutes after the event ended with all the content being created by pros and amateurs alike, and you may see in my case for the Bing results,  Australian, even New Zealand based results that are entirely irrelevant. Incidentally, I´m sat the other side of the world to those countries, in Spain. Most of the returned Bing results are abysmal. Instead of possibly relevant tweets results in my Bing search page I got served links for the internet Primate Aging Database (iPAD) - a  multi-centered, relational database of biological variables in aging, captive nonhuman primates. Monkey business?OK, to be fair by the time you read this, those results for the term iPAD of Apple fame - which has already attracted the disdain of the general public in many anglo-saxon cultures - will have almost definitely changed for the better and Apple will squeeze out the test tube primates back into their lab and happily allow everyone to Bing away and thus conflab about tech specs on the latest latest. And so whilst in SEO terms, recency may not always mean relevancy, in this case Bing just went totally flat on me, and completely shattered any trust it might have earnt from me in the last year. It just goes to show who in search engine terms is still very much on top of their game despite having two syllables and still sounding like a laryngeal disorder.On reflection, I don´t know if I´ll ever recover that sonic joy I had cultivated in my primary auditory cortex, somewhere in my temporal lobe, since Bing took a welcome bow on the stage last decade. Unfortunately Bing sort of rings hollow now, and perhaps explains why this video rings such a loud bell instead. Maybe it resonates with you too. Still curious about the other iPAD? What about you - ever felt chronically let down by a search engine?
Older Newer